My Plumber’s Body Odour Is Killing Me – Ifu Ennanda a

Former BBNaija housemate and reality star, Ifu Ennada has cried out on social media over the body odour of the plumber who comes to her house to work for her.

Ifu Ennada revealed that the odour of this plumber is very offensive as it is strong to the extent that it overtakes the whole house, however, in as much as she hates it and suffering badly because of it, she does not know how to tell him because he is older than her.

According to the former Big Brother Naija housemate, odour is killing her and is crying for help on what to do.

See what she wrote below; 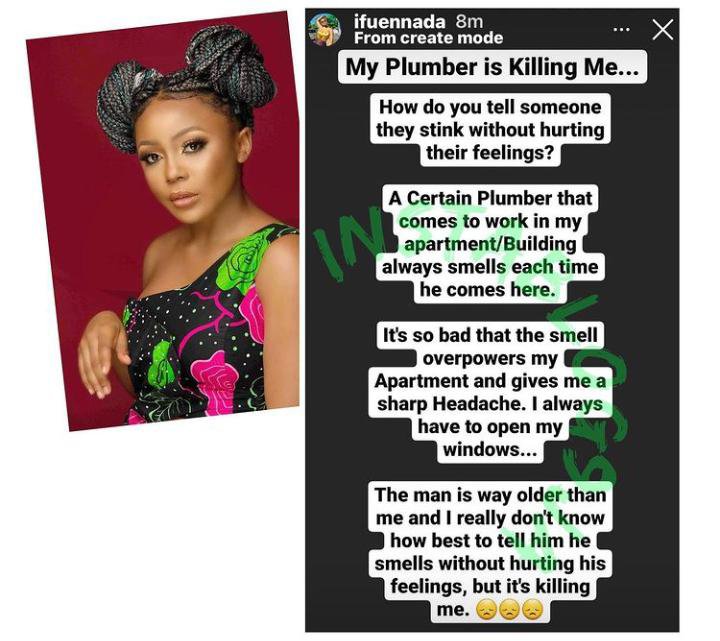 &nbsp; &nbsp; The most talked-about male barbie in Nigeria, Bobrisky has flaunted the worth of jew...

Popular politician, Ned Nwoko has cleared the air on his move to marry an eighth wife, after an alle...

Celebrity businessman,&nbsp;Ned Nwoko&nbsp;is celebrating his Moroccan wife, Laila Nwoko ahead of he...

The most talked-about crossdresser, Bobrisky has shared a note he received from a fashion entreprene...

&nbsp; Nigerian&nbsp;Nollywood&nbsp;veteran actor, Dan Nkoloagu who is very popular for his Chief P...

A Nigerian lady was recently excited and soaked in tears of joy after she received 25 cakes from her...

Eneh Gozie, a Nigerian soldier who is currently serving in Borno state, has celebrated his birthday...

Few Days After Omotola Was Accused Of An Affair With Oshiomole, Chats Between Her Husband & His Side Chic Leaks Online

“Insulting fans because they beg is not right” – Bobrisky