Politics took the back seat on Saturday as top politicians across party lines converged on Abuja to witness the wedding of Aliyu Atiku, son of former Vice President Atiku Abubakar, and Fatimah Ribadu, daughter of former chairman of the Economic and Financial Crimes Commission (EFCC), Mallam Nuhu Ribadu.

In attendance at the ceremony were the National Leader of the All Progressives Congress (APC), Asiwaju Bola Tinubu; former interim national chairman of the APC, Chief Bisi Akande; the caretaker chairman of the party, Mai Mala Buni and Governor Abdullahi Ganduje of Kano State. 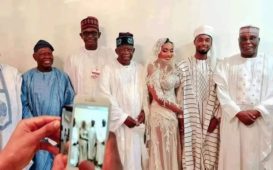 Ribadu, in a tweet last night, said it was “emotionally fulfilling” for him to drop off Fatima in her new home.

He said: “I just dropped off my daughter, Fatima, in her new home. It’s emotionally fulfilling exercise for a father.

“I deeply appreciate the honour done to my family by those who attended the wedding Fatiha earlier today, and those who sent in their goodwill and prayers. I thank you all.”

2 baba took to his Instagram stories to lament how NCDC mount exorbitant charges on travelers over c...

The embattled screen dive who suffered from an acute kidney problem has been hospitalized for a whil...

Reactions to death of Ada Jesus - “Pastor that cla...

Ada Jesus passed on from severe kidney disease; her death was confirmed today by one of her caretake...

The Nollywood damsel said some of these guys may be interested in them, but shy to approach them for...

The drag has progressed to a boiling point after an Asaba-based native doctor, Chi Marine forgave Ad...

The Tonto Dikeh&rsquo;s foundation organized an empowerment program for single mothers and widows in...

Nigerian actress Funke Akindele has taken her fans by surprise as she unveils the superb culinary sk...

The Nigerian singer and contribution to the music industry have earned him limelight as he is purpor...

Rita Edochie says as she forgives Ada Jesus “I hav...

“We sleep with one another in Nollywood, the profe...

In a recent interview with Vanguard, the movie god highlighted some of the goods and ills that are i...

Bobrisky cries out after a fan rained insult on hi...

Taking a look at the screenshot that was shared by the male barbie, a fan had desperately begged for...

The 50-year-old, who is still on life support at the White Plains Hospital in New York underwent cri...

We understands the veteran actor had battled with diabetes and going blind for years before eventual...

Triplets who got married same day in Enugu welcome...

The three sets of couples went viral after photos of their wedding ceremony circulated on social med...

Bobrisky beautiful natural transformation Bobrisky in the post shared a video where he flaunted his...

Recall that the actress and popular philanthropist took to her Instagram page to flaunt her new amba...

Singer, PSquare and others react as Bobrisky flaun...